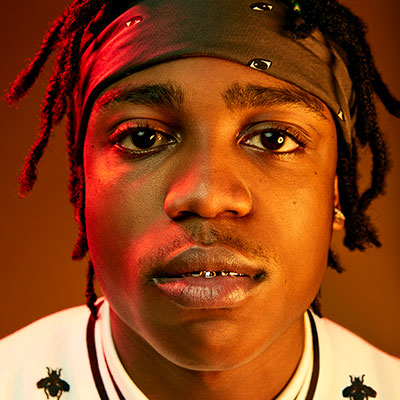 Just one word can represent an entire movement. In Brooklyn’s case, the word “Blixky” hints at the rising heat at the heart of the borough. That fire remains lit by none other than 20-year-old hip-hop force of nature 22Gz AKA “TuTu Da General.” Not only does the phrase serve as the name for his label debut mixtape, The Blixky Tape [Atlantic Records], but it also captures a singular and signature mindset unlike anything else in the culture. The artist’s fast-paced flow veers between bold bars and ironclad hooks underscored by a style synonymous with the Flatbush hood he calls home…

“The ‘Blixky’ sound comes from the swag of my hood,” he affirms. “It’s like a Caribbean trying to be fly guy and a shooter all at the same time. That’s what Flatbush is all about. You got those Caribbean manners, food, and community, but it can still be tough. I feel like that’s my personality though.”

22Gz has called the same neighborhood home since birth. The youngest of five siblings, he would be the first-generation New Yorker in a Guyanese immigrant family. The rapper’s father got killed just a month shy of his birth, while mom moved to Arizona in order to work when he turned six-years-old. Living with his older sisters, he gravitated towards rap music at a young age, starting off with 50 Cent and Jadakiss and eventually embracing Meek Mill, Migos, Future, and Young Thug during high school. An impressive dancer, he often attracted crowds by busting moves in the subway before eventually launching a YouTube channel for music “just for fun” in 2016.

“When you hear my songs, I hope you say, ‘That shit fire’,” he leaves off. “It’s some shit you can play in the car or at a party to turn up to. There’s slow songs too. It’s everything. I’m doing this to get out of the hood and make sure everybody is good. There’s more heat coming though—a lot more.”