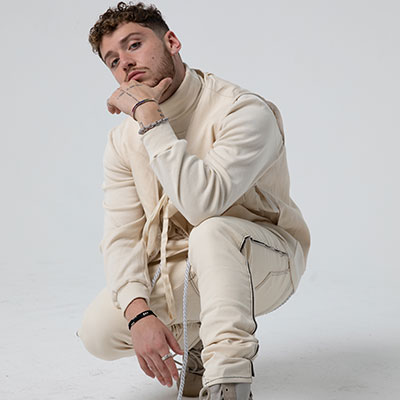 Grasping smoked-out sensual R&B and widescreen pop sensibilities inside of an eighties-inspired high-fashion fever dream, Michigan-born and Los Angeles-based singer, producer, songwriter, and multi-instrumentalist Bazzi wants to take you on a trip.

“There’s a genuine feeling in my music,” he exclaims. “It’s a mix of everything I grew up on—from rock to pop. You hear the guitars and real drum sounds with modern day elements and weird samples. It’s odd and different. It’s got a swag and flow, but you’re in this fantasy world at the same time.”

Long before unlocking that place, he took the first step on his musical journey back in Kenton, MI. Born to a Lebanese immigrant father and American mother, he shares stories of dressing up as Elvis to perform in front of the neighbors and dancing to Ricky Martin across the living room with a comb doubling for a microphone. Returning from a trip to Lebanon, Dad brought home an Oud, and a four-year-old Bazzi immediately took to the instrument. By the age of six, he picked up a traditional acoustic.

He independently released “Alone” on Soundcloud in 2017. Organically, the song generated over 1 million Spotify streams within a few months’ time and peaked in the Top 10 of the US Viral Chart. Next up, Bazzi unveiled “Beautiful.” After teasing a 30-second clip of the melody on Twitter, the snippet received 3,000 retweets encouraging him to finish the entire tune.

“It was just a vibe,” he reveals. “I was inspired by the ‘Beautiful angel’ line. I just laid the chords down and freestyled the melody. You should feel like you’re in a dream when listening.”