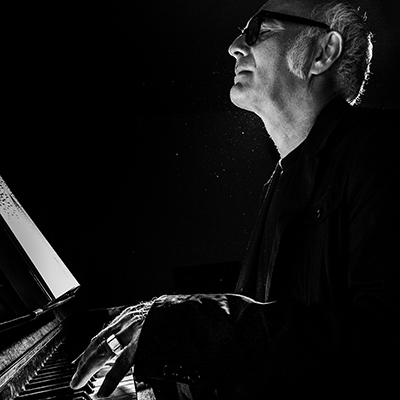 Pianist and composer Ludovico Einaudi was born in Turin on November 23rd 1955. Perhaps it was his mother, an amateur pianist, who gave him the first impulse to music, planting the seeds for what would become a fruitful, illustrious career. He began to study music at the Conservatory of Turin and graduated with a diploma in composition under Azio Corghi at the Conservatory of Milan. Immediately he began post-graduate studies with Luciano Berio, with whom he worked as assistant, and later with Karlheinz Stockhausen.

In 1982 his talents would win him a scholarship to the Tanglewood Music Festival, where he first came into contact with the American minimalism. He spent the next several years composing for the ballet, the cinema and the theater, including “Sul filo d’Orfeo” (1984), “Time out” (1988), “The Wild Man” (1991), and “Salgari” (1995), as well as many pieces for orchestra and ensemble, which were performed at La Scala of Milan, the Paris Ircam and the Lincoln Center in New York.

In 2013 he released “In a time lapse”, a reflection on time, recorded in a monastery and “conceived as a suite or as the chapters of a single novel”, in which his piano was accompanied by strings, percussion and electronic tracks. The world tour that followed scored many remarkable performances, such as the Sidney Opera House, the Arena of Verona and the acclaimed “Piano Africain”, for six pianos and six balafons and marimbas, which opened the Piano City Milano festival in 2014. The  album, “Elements”, released in 2015, sprang “from the desire to start anew, following different paths to knowledge”.

Recorded over a span of three months in his home studio in the Langhe countryside, “while spring was exploding”, the album became “a map of thoughts and feelings, points, lines, shapes and fragments of an ongoing interior flow through myth, Euclid, the periodic table and Kandinsky’s writings.” During the next three years, the “Elements” tour sold out either the world’s premier pop arenas and the greatest classical theaters. In 2016 he performed his “Elegy for the Arctic”, commissioned by Greenpeace, on a floating platform amidst the ice in the Arctic Ocean. The same year marked the debut of “Dieci Notti” at Teatro Dal Verme of Milano, which would become an annual concert series: ten consecutive days of performances, special guests and events, “to give back something to a city that has given me so much”.