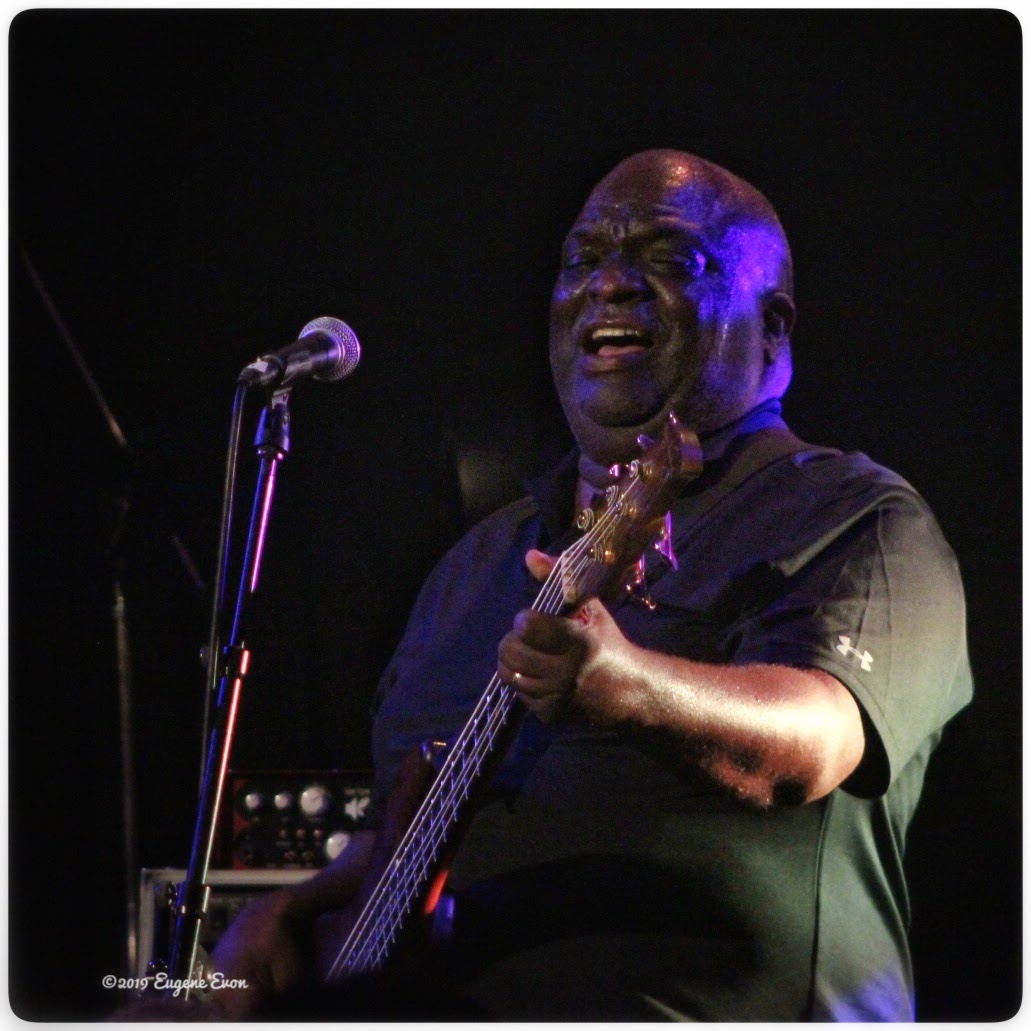 Two-time Emmy Award winning bassist, composer, producer and son of legendary Bay Area keyboardist, Merl Saunders, Tony Saunders‘ life has been infused with one musical adventure after another. As an arranger, producer, composer and performer, Saunders has conquered the world of jazz, gospel, R&B, pop, rock and world music. He earned the first of his two Emmys at age 14 for collaborating with his dad on the PBS documentary Soul Is and by 17 was playing with Merl and Jerry Garcia on their collaborative projects. The second was earned for his contribution on the TV show, Digital Journey, on the episode, “China: Their New Digital Economy.” Though he took one of his first musical lessons on piano from Herbie Hancock, the bass he received from John Fogerty’s brother Tom – and watching recording sessions with famed bassists Anthony Davis and Lee Miles – sparked a lifelong passion for that instrument that now, 50 years later, has led to his emergence as a major independent force in contemporary jazz.

In 2010, Saunders signed with indie label San Francisco Records after producing and arranging a project for the label. He launched his solo career in the smooth jazz genre with the well-received albums Romancing the Bass (2011) and Appaloosa (2013), which features an impressive array of guest appearances including vocals by Grammy winners Howard Hewett, Bill Champlin and Tony Lindsay. Saunders’ breakthrough album Uptown Jazz (2016) solidified his tight, funky and melodic urban jazz style. The first single “Uptown Jazz” reached #5 on the Smoothjazz.com chart, while its follow-up “Speak To My Heart” featuring Gerald Albright hit #3.

Four years after taking us straight to the heart of his memories of the NYC club scene growing up with Uptown Jazz, he delivered big time on his promise to make the best, most pleasurable, and sensually satisfying album yet with the perfectly titled Sexy Somethin. One of the great advantages of having so many years of musical success is Saunders’ ability to attract superstar guests to help him execute his steamy and funky vision.

First on his list is guitarist, producer and hitmaker Nils, who adds his crisp, fiery energy to Saunders’ relentless tight groovin’ on the opening track, a fresh and feisty instrumental twist on The Whispers’ late 80’s #1 R&B hit “Rock Steady.” Nils also plays foundational roles on two other can’t miss jams. On the uplifting, inspirational “Chasing The Dream,” he fuses the more fluid melodic side of his electric guitar artistry with a hood straight out of in the pocket urban jazz heaven. That chorus pairs the super soulful sax of emerging genre star Jeff Ryan with Saunders’ buoyant bass. Then the arrangement opens up and slows down a bit so that Saunders can solo with a thoughtful funk flow and create cool snippets of soul to soul conversation with Ryan.

Nils later pairs with Saunders and retro-jazz/soul keyboard master Jeff Lorber on the laid back, mid-tempo “After George,” a moody, easy groovin’ meditation on the masterful legacy of the late George Duke. As Duke often did, the track gets funkier and wilder it grooves on, with Lorber creating an otherworldly, trippy synth solo and then a more organic piano improvisation that pay direct homage to the jazz/R&B fusion era Duke so defined. Nil’s isn’t the only big-name guitarist featured on Sexy Somethin. For the silky and simmering, anticipation filled self-portrait “Tony’s Romance,” Saunders pairs his tight, snappy bass and a dreamy synth atmosphere with the old school jangle, cool harmony lines and crackling inventive soloing of Paul Jackson, Jr. This isn’t your typical candlelight date, more like an invitation to groove all night long with a dance partner – with Saunders and Jackson as the perfect soundtrack.

Later, when Saunders really wants to get down on the hypnotic snare-drum driven title track, he floats his steamy basslines over the jazzy elegance and synth wizardry of another prominent guest star, Gail Jhonson. In the middle of the snare funk, he simmers down for a thoughtful reflective moment as if pondering the next phase of his sexy relationship. Jhonson also contributes touches of Rhodes magic to another instantly impactful mid-tempo in the pocket joint, “Bouck Avenue,” which finds Saunders laying a groovy foundation for co-writer and co-producer Ray Chew’s sparkling piano melody and Paul Brown’s always infectious bluesy guitar.

Besides Ryan, Saunders has features for several other incredibly emotional saxophonists – the always seductive Marion Meadows, helping create the deep dual moonlit romance flow on the instant classic ballad “Whispering Water”, Norbert Stachel, who contributes both whimsy and breezy cool to a song whose title says it all about its heartfelt intentions, “So Smooth and Sexy”; and Donald Hayes, who plays it cool and subtile on what is perhaps the collection’s sweetest and sultriest gem, the slightly melancholy but also encouraging “When You Cry.”

Saunders explains, “My favorite part of my journey into the urban jazz genre is having the opportunity to work with artists I’ve admired for years who I am proud to now call my peers. Gail Jhonson, Ray Chew and Magic are all producers who are family. I knew they would make me better. I know my dad, who passed away in 2008, would be proud of all I am doing now. He made me feel that I was worth a million dollars, and always held me on a pedestal no matter what level I was at as a player. It was always fun challenging each other and I know we would be doing that today if he were still here.”

Saunders boldly claims, “I play the bass like B.B. King played Lucille, with a passion that is all about conveying warmth and making people feel the music. I’m not a virtuoso and don’t feel the need to play fast to impress anyone. I love people; that’s the way I let them know.” He is in the house band at the Blue Note in Napa, where he has also played with his own group, featuring Keyboardist Gail Jhonson (Norman Brown & Jazz In Pink), guitarist Vernon Black (Mariah Carey, Maze, Herbie Hancock and Booker T.). Saunders has also played jazz at Yoshi’s in Oakland, Humphrey’s Concerts By the Bay in San Diego, and has opened for Jeffrey Osborne. Every year, he heads back East to perform in an all-star concert celebration for Jerry Garcia’s birthday at such venues as the Strand Theatre in Lakewood, New Jersey and the Brooklyn Bowl. Playfully hinting at the romantic nature of his music, Saunders says, “We play music that when you get home, you’ll thank God you came to the concert.