The first time they sang on a radio station, The Carr Twins were only 3 years old.  Music Pioneers in Chile with over 20 number 1 hits, Carlos and Juan Carrasco began a sweeping recording career that would span for decades. Their current release "Hablemos" showcases Carlos's incredible songwriting abilities and the brothers' unequaled blend of harmony.

Carlos continues to perform at Major Events and the Florida Night Club circuit... enjoying success and longevity in the music business today. 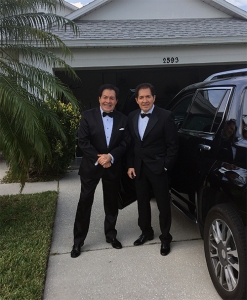 Carlos, you and your brother Juan have enjoyed quite an accomplished and deserving career. You both have been singing and performing at a very early age. When did you start singing together and when did you know that you had this unique and surprising gift?

Carlos Carr: Actually it was my mom who discovered that we, at an early age, started speaking with some kind of a melody, a rare intonation, she taught us how to sing La Marseillaise, and that's where all started, after we sang in radio at 5 that was it !

You performed on the program "The Wish Fair" hosted by Raúl Matas, known as one of the Fathers of Television in Chile on Radio Minería. How old were you then and how did this come about?

CC: Well it was a radio program where anyone could do something special for someone... read a poem wish a happy birthday etc. Juan and I went to sing a song for our Dad on his birthday, we were 5,  and the people loved it.

CC: Well it was a fabulous experience. There were very loving and talented adults helping us, about 30 kids ages between 5 and 12 with suggestions and guidance, not everybody sang. Some read poems , dance and played an instrument.

You not only have a great voice, you are a very talented composer and had over 20 #1 songs throughout Latin America. What was the creative process when you wrote those songs at such an early age? Did you start with lyrics... or music? How did you create those captivating harmonies?

CC: Well the music writing came as a need to have songs that were originals. We were then with EMI and they wanted to set a team of writers to write originals for us. Till then I was always sort of humming weird melodies with some funny lyrics I never took it seriously but when they wanted to have people write for us I said to myself why don't I give it a try. It's funny, that everything comes to me at once the music and the lyrics. To be honest, I could write all day sometimes I hear a word or something and I start in my mind to hear a melody for which I start , in my mind, to think of words about it. I guess it's a natural thing in me. 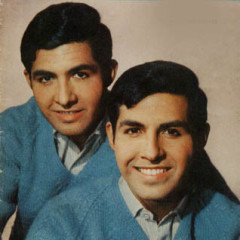 Hearing your music on radio and having #1 hits must have been very exciting. Tell us about the first time you heard your song on radio… and when it hit #1? Where were you when you heard it? What was your family’s reaction when they heard The Carr Twins on radio?

CC: The first time we heard ourselves in the radio was an amazing experience, when we had our first #1, it was the most exciting thing ever. We were home listening to The Chilean Hit Parade.

"Vida Mia" was one of the many beautiful and popular songs that you wrote and recorded. You also recorded this track with an orchestra. What was your inspiration behind "Vida Mia"?

CC: Well I had just heard on the radio "Last Date" by the fabulous Floyd Cramer. It was something about the rhythm of the song that brought a melody in my brain and the rest was easy. I've been a romantic fool all my life so it was just the telling of an ideal situation between two people. The poetry of the lyric is probably the best I’ve ever done. The metaphor is hard to translate but it’s so simple and beautiful, that's the real beauty of the song, simplicity. It took me ten minutes to write it. I’ve sang this song thousands of times to a point I didn't want to sing it anymore. Later in life I got to fully appreciate it.

For Vida Mia, we had a full orchestra behind us 16 violins, 4 cellos, 2 violas, a harp, rhythm section piano base drums, guitar plus bongos, and a fellow from the National Army who played the harmonica which it was my idea for the solo. It was arranged by Valentin Trujillo, a treasure of Chilean music. It was an amazing recording. It's still in my mind. It was my first original. It was very exciting to see the final product.

You then made the move to the US and lived and performed in Las Vegas. Why the move to Vegas?

CC: Well we were living in Argentina and we hosted our own TV show. We used to bring the biggest stars of the time to our show: Neil Sedaka, Trini Lopez, Van Johnson, Nancy Wilson, George Maharis... from the States and other people from Europe and Latin America. Everybody used to tell us to come to America and since we had done almost everything in Latin America, we decided to follow the advice. We recorded first for Odeon /EMI, in Argentina a couple of originals in English to show here in the States. We got picked up by Buddah Records the first week we were in the US, it was like a movie, but unfortunately, they had a different vision for our career, to keep singing in Spanish, we said, for that, we go back to Argentina. So after the first album , which took forever, we parted, So we moved to Vegas to work for a living.

Being in Vegas for quite a while, you probably have many unusual and interesting stories to tell. Carlos, share with us one Vegas story you will never forget?

CC: Vegas was an amazing place we work all the main Lounges from The Hacienda to the Union Plaza. Met all the big stars: Sammy Davis, Tony Orlando, Stevie Wonder, Ray Charles, Diana Ross, Tom Jones... It's a crazy place... you work the weirdest hours. One time our manager, booked us at two places at the same time The Union Plaza and The California Hotel. Each across the street from each other, we used to start at the Plaza from 6 Pm to Midnight and then at The California, from Midnight to 6 Am, for four weeks!!!! That's crazy ain't it ? 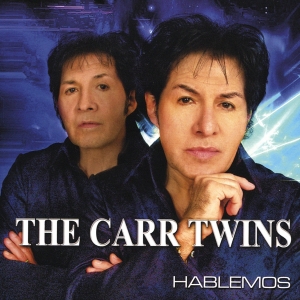 Wow... what a wild schedule!
One of your recent releases titled "Hablemos" really captured the range and harmonic abilities of you and Juan. The songs you wrote in "Hablemos" have such memorable melodies and really appeal to a wide audience. What was the concept and your thoughts behind this Project?

CC: I wanted to write songs that will express all my feelings and emotions, to let my fans know more about me through my different flavors of music… as if we were sitting down having a chat, learning about each other… Hablemos… Let us Chat.

You are currently performing at numerous events and also enjoy the local Florida club circuit. Only few artists have the longevity in this business as you have. How do you do it?

CC: Yes "I'm still crazy after all these years" I just love to perform and meet people. I have a lovely following and I’m singing today the songs of The Great American Song Book, which not many people do. I see the smiles in the audience and that makes my heart sing. Music has that quality, it brings joy and also keeps me young. I also try to be disciplined in my personal life and do everything with moderation, I also exercise daily.