When an iconic pianist like Chick Corea gets together with such modern masters as bassist Christian McBride and drummer Brian Blade, perhaps it should come as no surprise that the music they create together is absolutely magical. Their 2014 release Trilogy earned universal acclaim, including a pair of GRAMMY Awards (Best Jazz Instrumental Album and Best Improvised Jazz Solo for "Fingerprints"), and confirmed the trio as one of Corea's most revered ensembles.

Despite sprawling across three jam-packed CDs, Trilogy left fans everywhere clamoring for more. So when the three virtuosos reunited for another world tour, the results were captured for posterity and the highlights are now collected on the long-awaited follow-up, Trilogy 2. Set for release on October 4, 2019 via Concord Jazz, the double album is another treasure trove of sparkling energy and thrilling in-the-moment invention.

Each member of this trio is a giant in the jazz world and beyond, but the peerless chemistry they share elevates their collaborations into the realm of the truly special. Even before coming together as a self-contained unit, the three had gelled on tour with Corea's Five Peace Band, an electrifying all-star ensemble he co-founded with fellow legend, guitarist John McLaughlin, and featuring Kenny Garrett on saxophone. On their own, the trio pairs high-caliber musicianship with an easy camaraderie, making for music that is as artistically exhilarating as it is fresh and playful.

"In every group that I work with, the fun factor is the number one criterion," Corea says. "This trio is incredible fun. That's not something you can dictate, but if that's the experience then the music just flows. With Christian and Brian, we have a blast on the road." 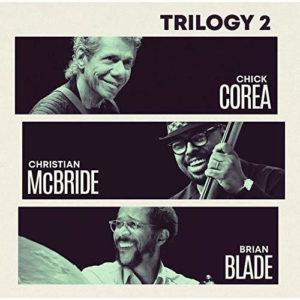 That feeling is captured throughout Trilogy 2, which features tracks hand-picked by Corea from throughout the trio's recent world tour. The albums capture the feel of a concert program, both in the flow of the music and in the illuminating recording by Bernie Kirsh, Corea's longtime engineer. The material spans a range of inspirations, from American Songbook standards to jazz classics, reaching back into Corea's own catalogue as well as that of some of his most renowned collaborators, including Miles Davis and Joe Henderson.

Corea likens the experience of playing live with this trio to "taking a stroll down the street and having a casual conversation. We have a pretty extensive repertoire of songs, and because of the looseness of the trio each one becomes a new thing every time we approach it."

After briefly welcoming an audience in Bologna and introducing his "genius partners," Corea kicks off the program with an incisive, querying solo introduction to "How Deep Is the Ocean?" – one of only two tracks reprised from the original Trilogy. Over the next twelve minutes the trio plumbs the depths of the familiar standard, seemingly intent on exhausting every possible answer to the titular philosophical question. From the depths to the heavens, they follow up with Corea's own "500 Miles High," originally recorded by the first incarnation of Return to Forever in 1972.

The trio delves into Corea's composition book for two other pieces on the album. "La Fiesta" dates back to the first Return to Forever album and showcases the pianist's passion for Latin music, a side that he explored earlier this year with the release of Antidote, the debut of his Spanish Heart Band. "Now He Sings, Now He Sobs" is the title track to Corea's first-ever trio album (and only the second release to his name), recorded in 1968 with Miroslav Vitous and Roy Haynes. This marks his first official recording of the tune since then;  McBride and Blade both requested it for this tour, and the result is the set's most expansive excursion.

"More than being a pianist," Corea says, "I always think of my basic purpose as being a composer. Though I love playing the piano, too. Thelonious Monk was a model for me in that regard. He was a composer, a piano player, and a bandleader, who defied so many conventions and created a body of work that is completely up there with Stravinsky and Mozart, in my opinion."

Monk's compositions are as ubiquitous a part of Corea's live repertoire as are his own tunes, and Trilogy 2 offers a pair of the jazz icon's eccentric pieces. "Crepuscule with Nellie" is a favorite of jazz pianists (despite Corea's admission to a lifelong misreading of the title), taken here at a warm, leisurely pace. "Work" is a more obscure selection, though a particular favorite of Corea's; it also appears on the first Trilogy, and he recently arranged it for Wynton Marsalis' Jazz at Lincoln Center Orchestra.

"'Work' is a quirk," Corea jokes. "Monk was a quirk, for that matter – the most genius, amazing quirk in the music world. His tunes are incredibly fun to play and rework."

The trio's romantic side emerges on a lovely reading of Jimmy Van Heusen's "But Beautiful," featuring lush brushwork from Blade, an elegant, wistful solo by Corea and a breathtakingly lyrical turn from McBride. The pace picks up for bassist Steve Swallow's "Eiderdown," its sharp turns unleashing a ricocheting, rapid-fire back-and-forth between Blade and Corea.

Corea's arrangement of Stevie Wonder's classic "Pastime Paradise" was sparked by a suggestion from the soul genius himself. "I've been friends with Stevie since he used to come around to listen to Return to Forever in 1973 at The Bitter End," Corea says. "A few years ago Stevie sat in with us at Catalina's in Los Angeles and we went out to dinner afterwards. We were talking about songs and I was using the term 'standards,' and Stevie turned to me and said, 'Hey Chick, what do you think about playing some new standards?' I thought that was interesting and asked, 'What do you mean?' And he said, 'You know – my music!' He was kind of kidding around, but not completely, and I thought that was a great idea."

"All Blues," of course, harkens back to Kind of Blue, the landmark album by Corea's famed former bandleader, Miles Davis. The trio takes the tune at a loose, buoyant tempo that's as infectiously fun to listen to as it undoubtedly was to perform. Corea also spent some formative years in the band of tenor giant Joe Henderson, whose "Serenity" (another McBride suggestion) is rendered in a smoldering take featuring the bassist's fleet, muscular solo. The piece is tied in Corea's memory with the closing tune, Kenny Dorham's "Lotus Blossom."

As the pianist recalls, "I spent a great, memorable week playing with Kenny at the Jazz Workshop in Boston when he and Joe Henderson had their quintet with Reggie Workman and Joe Chambers. We played 'Lotus Blossom' and 'Blue Bossa' and some of Joe's tunes. That was a really pleasant memory for me."

At the age of 78 Corea continues to generate indelible memories for audiences around the world. No doubt the performances captured on Trilogy 2 have lingered in the imaginations of the audiences fortunate enough to catch them live; now they get to live on in the minds of jazz lovers everywhere.