An ever-evolving artist and musical voice of extraordinary depth and insight, Darrell Kelley has forcefully met many of these moments by speaking truth (and truth to power) 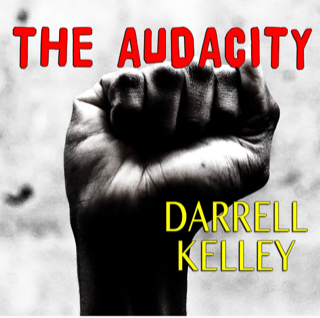 The year 2020 is not yet half over, but between COVID-19 and the global protests for systemic change in the wake of the murder of George Floyd, it will go down as a watershed in world history, a wake-up call for humanity when complacency was shattered and sitting on the sidelines was not an option for socially conscious people.
An ever-evolving artist and musical voice of extraordinary depth and insight, Darrell Kelley has forcefully met many of these moments by speaking truth (and truth to power) with an ongoing array of worldwide hit singles addressing key issues – including “The Coronavirus,” “Ahmaud” and “Police Brutality.” While these and other politically charged songs – including the fiery title track and “Vote Him Out,” both critical takedowns of Donald Trump – form the core of The Audacity, the Atlanta based singer/songwriter’s latest full-length album, Darrell balances them with songs about love, hope and unity that offer a constructive way forward beyond these anxious and challenging times.
“To be honest, until someone pointed out how many songs I had that addressed socially relevant issues, I never saw myself as that kind of artist,” Darrell says. “I grew up listening to great artists who wrote important message songs like The Staples Singers, Stevie Wonder, Paul McCartney and Bruce Springsteen, and feel there aren’t enough of them now. But this was never a conscious intention for me. I’m just a guy who has definite opinions about what’s right and wrong in our lives. If I see something wrong, it shouldn’t go unnoticed.
“When people listen to The Audacity,” he adds, “I want them to get a very strong message that as taxpaying Americans, we the people are the ones who run our country. Our vote is what empowers us. You have to realize the power you have and not let the system play tricks on you. There are very serious things going on in our lives here in 2020, and we have the ability to be the change we seek.”
Currently, four of the songs on the new ten track collection are in the Top 20 on the World Music Indie Charts. “Police Brutality,” written and recorded immediately after Floyd’s murder and addressing our nation’s racial bias when it comes to policing, is Darrell’s latest smash at #1 and has been played on over 200 radio stations worldwide. Putting his money and physical presence where his grooves and hard-hitting lyrics are, the singer took the initiative to fly to Minneapolis and do an impromptu performance of the song for thousands gathered around the very spot where George Floyd was killed. Darrell also attended a memorial for the slain man in Houston the day before his funeral, where he was interviewed by Al Jazeera’s John Hendren.
The other three songs on The Audacity that are currently in the upper reaches on the chart are “Ahmaud” (#4), a heartrending song about the inexplicable tragedy of Ahmaud Arbery, the unarmed 25-year-old African American fatally shot after being pursued and confronted by two white men in Satilla Shores, Georgia; “The Coronavirus” (#6), which he penned early in the pandemic to speak harsh truths and the important urgency to listening to health officials (and of the dangers if we don’t); and “Because of You” (#19), a searing R&B ballad addressing the tragedy of gun violence in our schools. “The Coronavirus” currently has over 266,000 streams on Spotify and its two YouTube videos (official video and lyric video) have amassed over 330,000 views.
Speaking provocative truth to power from the get go via its title track, The Audacity finds Darrell addressing Trump directly, singing (over a seductive, hypnotic groove) lines like, “You have the audacity to tell us to open up the country/Especially when we don’t have the things we need like vaccine. . .I know our life’s more important than the stock market or economy. . .How in the world can you protect us if you can’t protect yourself. . .You have the audacity to disrespect reporters. . .” Later in the tracking, on the incisive “Vote Him Out,” he calls out Trump on his lies and makes clear the importance of going out and standing up for what we believe in by voting “that sucker out.”
The Audacity also finds Darrell revisiting several previously released tracks from his critically acclaimed 2018 album Unity, including the title track, an impactful, meditative and cautiously optimistic reminder that “we all need to come together as one” and the fact that “our blood is the same color, so that means we all are sisters and brothers.” In sharing his belief that “Unity is all we need,” he urgently advocates for making a change, stop all the hurt and heal all the pain.” George Floyd’s murder has inspired America to revisit the meaning of NFL quarterback Colin Kaepernick’s decision to kneel in silent protest against police brutality. It made thematic sense for Darrell to include “Believe in Something (Kneel),” his song addressing those who initially criticized Kaepernick’s move, which cost him his career.
Wanting to wrap the album on a high note, Darrell follows “Vote Him Out” with his playful, grooving club single “Turn It Up” – as if to say, once America takes its first step into a new era, we can take a moment to celebrate. In the middle of the collection, he also includes another recent single, the ultra-romantic ballad “Love and Need You” – which he wrote and produced with his son Kevin – as a reminder about the importance of love and the connection between people, and how those things can help us through these dark times.
Learn more at darrellkelleyofficial.com; news and updates facebook.com/darrellkelleysmusic. Watch his music, performance and commentary videos at youtube.com/user/latenightwithdarrell/featured.
Listen at soundcloud.com/user-792034936, or reverbnation.com/darrellkelley, and/or darrellkelley.bandcamp.com. You can follow him on Instagram at darrellkellyofficial.