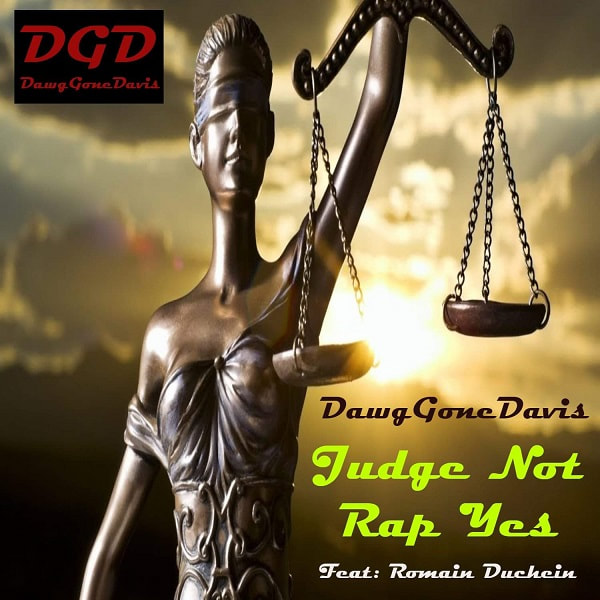 Rebecca “DawgGoneDavis” is a true musical phenomenon. With an ever-expanding international legion of fans from 16 to 70 and beyond hanging on her every crafty rhyme, clever twist of phrase and insightful, witty storytelling, she is here to stay.

Over the past 23 months, the Kansas City based hip-hop artist, rapper, rocker and songwriter has released 12 infectious tracks that have received spins on an astounding 4000+ terrestrial, internet and satellite radio outlets throughout Europe, Asia, South America and the United States. In mid-2018, the multi-talented performer compiled her first nine hits into a collection perfectly titled after her respect and passion for Neil Diamond music, Hot Dawgest Night.

With a playful yet socially impactful message perfect for these contentious times, DawgGoneDavis’ extra-fiery new single “Judge Not, Rap Yes” comes hot on the heels of her two most recent smashes, “Baby, I Have Words” (a colorful tribute to the late Ronnie Van Zant, co-founder and original lead singer for Lynyrd Skynyrd) and “Here Comes Santa Dawg,” a holiday themed homage to her recently-departed beloved dachshund Hans. “Baby, I Have Words” reached #10 on the Euro Indie chart, while “Here Comes Santa Dawg” was #2 for two consecutive weeks and has remained on the charts in London and the UK long past the holiday season, into mid-February.

Over a high energy production and edgy, rockin’ groove, DawgGoneDavis raps, “Judge Not, Rap Yes/You know the one about the book and the cover/Listen up/Whaaatever/You got some gumption/Making that assumption.” She was inspired to write the lyrics when she realized that some of the folks in her small town outside KC were surprised that a middle aged woman they saw every day could also be an international recording star creating innovative hip-hop tracks on par with any being created by much younger artists.

“I think what people come to realize when they listen, is that this is the REAL Rebecca Davis,” she says. “We’re all misinformed by the TV and movies we watch that influence the way we see the world and perpetuate the limited mindset we have about people. On a more universal level, though it’s a funny track, I’m serious about the world being so quick to judge. In today’s culture, it’s all about looking quickly at something and thinking you’ve got the whole story instead of looking deeper. We shouldn’t be judging people who are different from us. I’ve been as guilty of that as anyone, so I’m speaking to myself as well here.”

Behind DawgGoneDavis’ silliness, wit, poignancy and Type-A personality is her secret musical weapon, French-based collaborator and renowned Euro producer and multi-instrumentalist, Hellmut Wolf. Rebecca records her raps acapella at the “Audio Cave” studio in her hometown of Kansas City, then sends the .wav file off to Wolf to work his sonic magic – which includes anything from sensual, jazzy atmospheres and cool sax soloing, booming percussion and deep soul grooving. “Judge Not, Rap Yes,” featuring Wolf on saxophone, is their latest collaboration driven by a powerful ROCK aesthetic featuring the fiery electric guitarist Romain Duchein, whom Rebecca calls “the new part time rocker in the DGD house.”
With a unique, hilarious, erudite, self-effacing and no holds barred approach to baring her wild and crazy soul and whimsically sharing her truth, DawgGoneDavis has tackled a wide array of concepts in her lyrics. Her #14 smash “Forever Music” expresses her equal passion for the classical music her dad played (Mozart, Haydn, etc.) and the classic rock her siblings graced her with (Elvis, Three Dog Night, Warren Zevon). “Anthem Pandemonium,” which reached #4, shares her conviction that she will not be a novelty or flash in the pan. “Blast out of the bottle/Going full throttle,” the rapper’s ongoing creativity will ensure that she will keep blowing the minds of open-minded rap, hip-hop, Rock, and pop fans worldwide, along with the excited college kids across America she’s already got in her pocket.

DawgGoneDavis is currently finished working on tracks about how older folks and Rockers use tattoos to cover age spots; another that includes the lines: “Chubby Checker, Chubby Thighs/Rock and roll never dies”; and another about lack of privacy in the internet era and that when it comes to our personal data, Big Brother is indeed watching us.

A lifelong Kansas City Chiefs fan, she will be happy to show off her revised team logo tattoo on her hand that has the score of their recent Super Bowl Victory – and then share the other hand with you, where you can see her small Jesus, Fisher of Men tat.