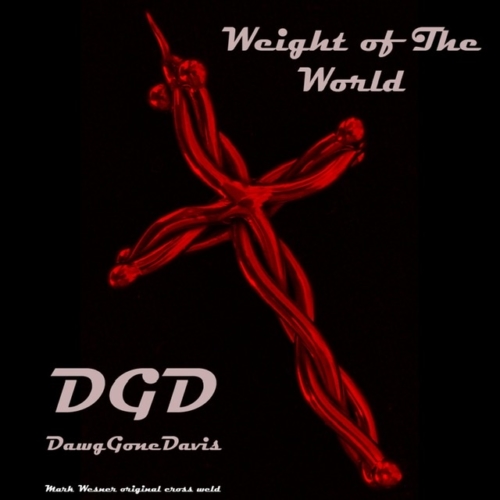 DAWGGONEDAVIS
“Weight of The World”

When the calm of the world is at stake, and every message of hope is crucial to our collective peace of mind and the endurance of the human spirit, it’s not only possible, but essential to present any form of love. Summoning courage and compassion in this very frightful era, international phenomenon Rebecca “DawgGoneDavis” branches out from her popular trademark hip-hop, rap and rock vibe to create the Techno “Weight of The World” – a powerhouse, high energy track she calls “a huge prayer and ask.” Calling to the Lord for divine assistance like the Psalmists of old but with a distinct, hip 21stCentury flair, she draws on her deep faith, indelible wit, clever rhyming abilities and vocal prowess to create what she calls a “pleading and prayerful song.”

Produced in collaboration with her secret, yet masterful musical weapon, French-based collaborator and renowned Euro producer, saxophonist and multi-instrumentalist Hellmut Wolf, “Weight of The World” rolls over a throbbing dance groove like a colorful stream of consciousness plea for help, anchored in her pointed repetition of the question to “Jesus Sir”: “Can you spare a cure?” The Kansas City based artist begins the flow with poetic words she first wrote in childhood that she later published in her book “Intergalactic Hans So Low”: “The sun in the day/And the moon out at night/Are the lone eyes of God with us in his Sight.”

DawgGoneDavis’ loving and optimistic spiritual mindset emerges with lines like “Band you Angels, draw your swords/Something’s gone viral/And it is not life/Let us love Jesus” and “The souls in heaven/Are pulling for you/The Weight of the World/Rests on one Jew.” Later, after voicing her concern for friends and family in hard-hit Italy, France and Germany, she raps poignantly, “Lost my faith in the past/Really not so distant/Defeated, squashed by a crime insistent/Up upon Easter/We can’t take no more. . .He said, I’ll hang around to heal your core.”

Another ongoing thread is DawgGoneDavis’ multiple colorful lunar references, from her declaration “Now I’m over the moon/He had me at swoon” and an initial call-out to Neil Armstrong, to an “ask” that Jesus not “wait for that lunar eclipse” to “please kiss our lips.” She also invokes Jackie Gleason’s famous “Honeymooners” line “One of these days Alice…straight to the moon,” which she follows with a solemn “God bless all you Alices,” referring to the departed who got the virus and are now “peeps chilling on the moon.” She also sneaks in her Respect for Neil Diamond a couple times, including a reference to his classic memorial song to those whose lives were “Done Too Soon.”

“Though I had been talking with Hellmut for a while about venturing into techno music, I had not planned to write and record a song about this terrible crisis – yet I felt pushed and called to create a song asking Jesus to help us, and feel it’s my strongest to date,” says DawgGoneDavis, whose most recent hit, the fiery “Judge Not, Rap Yes,” reached #3 on the WorldIndiechart.

“When I wrote the first verses, I had no idea what they would lead to, but as Hellmut encouraged me, it became more evident that faith had to come out. That’s the purpose of the song, to somehow encourage people to remain hopeful that we’ll get through this. It’s a way of addressing that our hearts and lives are broken and many of us are down on our knees praying and asking Jesus for help. As the lyrical flow developed, the wordslent themselves showcasing another side of our artistry and ourlove for techno music.”

With an ever-expanding international legion of fans from 16 to 70 and beyond hanging on her every crafty rhyme, clever twist of phrase and insightful, witty storytelling, DawgGoneDavis’ every song is making a resounding impact. Over the past two years, she has released 13 infectious tracks that have received spins on an astounding 4500+ terrestrial, internet and satellite radio outlets throughout Europe, Asia, South America, the UK,and the United States. In mid-2018, the multi-talented performer compiled her first nine hits into a collection perfectly titled after her respect and understanding of Neil Diamond music, Hot Dawgest Night.

With a unique, hilarious, erudite, self-effacing and no holds barred approach to baring her wild and crazy soul and whimsically sharing her truth, DawgGoneDavis has tackled a wide array of concepts in her lyrics. Her #14 smash “Forever Music” expresses her equal passion for the classical music her dad played (Mozart, Haydn, etc.) and the classic rock her older siblings graced her with (Elvis, Three Dog Night, Warren Zevon). “Anthem Pandemonium,” which reached #4, shares her conviction that she will not be a novelty or flash in the pan. “Blast out of the bottle/Going full throttle,” the rapper’s ongoing creativity will ensure that she will keep blowing the minds of open-minded rap, hip-hop, Rock, and pop fans worldwide, along with the excited college kids across America she’s already got in her pocket. Now, Techno joins the whole gang.

A lifelong Kansas City Chiefs fan, she will be happy to show off her revised team logo tattoo on her hand that has the score of their recent Super Bowl Victory – and then share the other hand with you, where you can see her small Jesus, Fisher of Men tat. In writing and recording “Weight of The World,” she reaches out to a belief system like never before to speak ‘With folks’through these dark times – and you can dance to it as she does(with the volume turned up Loud)!