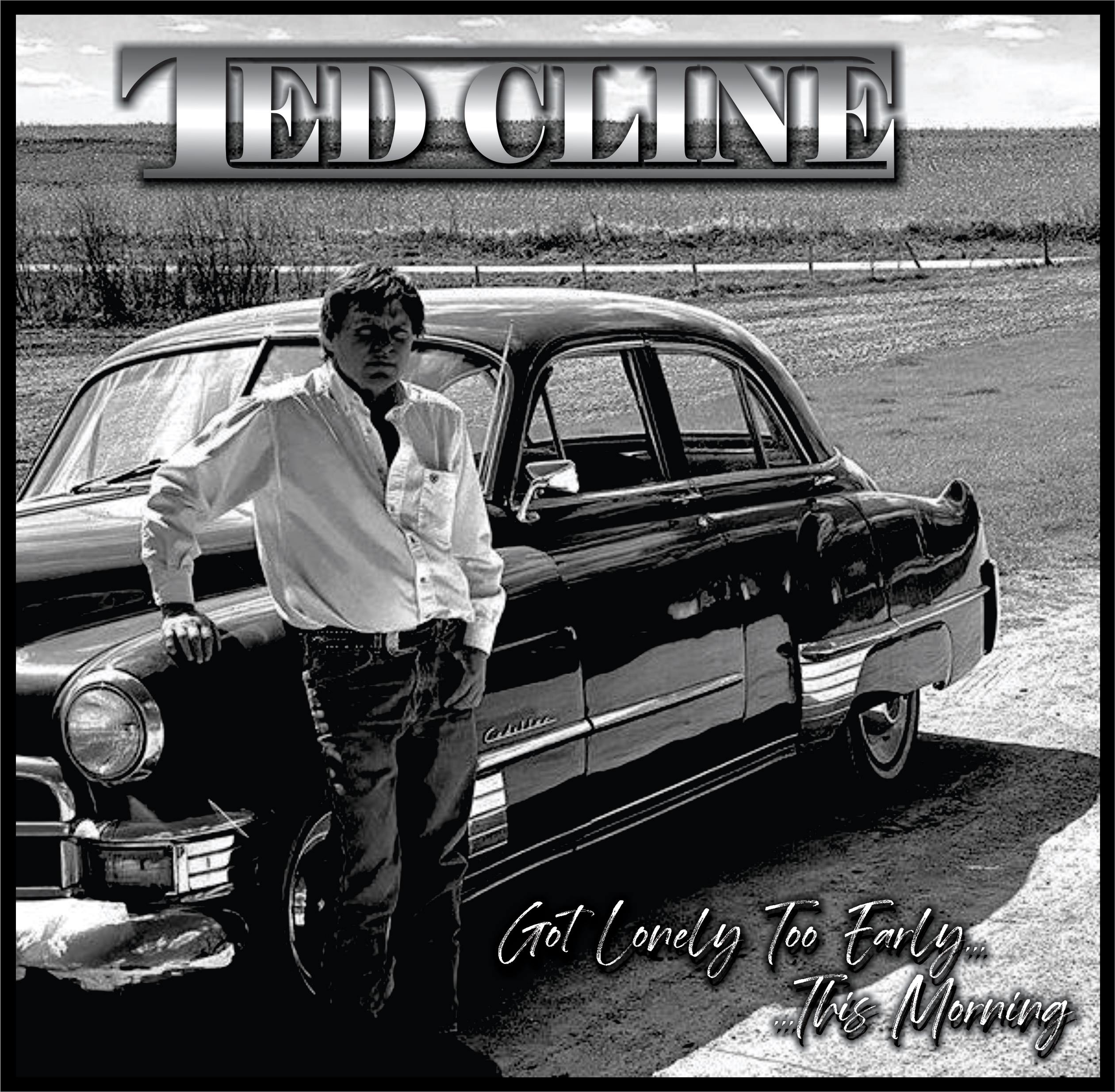 When Ted Cline uses the phrase “Country Music Done Right” to describe his engaging vibe, the Kansas City area-based singer/songwriter isn’t simply being crafty or clever. He’s talking about creating an artful crossover balance between the classic country he grew up on – the old-timey, bluegrass and Appalachia-influenced vibe and storytelling magic of George Jones, Merle Haggard, Hank Thompson and Marty Robbins – and the hip and shimmering edges of the contemporary genre, along with a solid dose of the R&B he also played when he first hightailed it to Nashville at 18.
After thousands of live gigs, decades singing and playing fiddle and mandolin with legends and being the impresario of his very own Cline’s Opry club in his hometown of Weston, Mo, Cline is now stepping out as an artist in his own right. Off to an inspiring start internationally, his recently released debut single, a rollicking modern take on Merle Haggard’s 1979 album cut“Got Lonely Too Early This Morning,” hit #2 on the World Indie Music Charts and #8 on the Euro Indie Music Chart.

The Haggard track is one of four powerful songs he is releasing as the Ted Cline Music CD. Creating a powerful introduction to his well-seasoned, ever evolving artistry, the others are a soulful, lilting, acoustic and steel guitar driven version of Stephen Bishop’s island pop classic “On and On”; the lively tongue-in-cheek acoustic gem “Don’t Think I Want Her Back,” penned by Cline’s songwriting collaborator Gary Beard; and a stomping, playfully swinging romp through Willie Nelson’s “Three Days” that falls between the slow 1962 Willie original and the amped up 1989 version by k.d. lang and The Reclines. Later this year, Cline will be releasing a batch of original songs written by him or co-written with Beard.

Testament to his many years working with the top musical names in Nashville and beyond, Cline’s first tracks feature an array of studio greats. Produced by Kenny Royster (whose major production and engineering credits include Luke Combs and Cowboy Troy), the songs were recorded in Music City with an ensemble featuring steel guitarist Scotty Campbell, drummer Nick Buda (Taylor Swift) and guitarist Johnny Connelly (Kenny Chesney).

“My music is kind of hard to define because I am a traditional country artist who believes you can do music that is fun and very much appeals to today’s audiences while still keeping true to the roots of the genre that’s been part of my life since the beginning,” says Cline. “People I know who prefer the classics ask ‘Why can’t we go back to the great old stuff?’ but I say there’s a way to do that old and make it fresh, new and appealing to younger people with a contemporary sound. I’m developing a new sound that fans of both can connect with. That’s what I mean when I call it ‘country music done right.’”

The minute you hear Cline’s lived in vocals with that dynamic drawl, you’ll feel the down-home authenticity that only comes from being a cradle country boy. He’s not just singing these songs, he’s lived them over and over again. One of 13 kids, he grew up the son of a tobacco share croppe rin Weston, a famous tobacco and whiskey town that’s become a top tourist spot for those visiting KC. Taking to music early, his first gig was an old time country music show in Northwest Missouri (around age 11) and he played in shows and toured with an Opry cast all over the country. He was also Iowa state mandolin champ at 16.

Moving to Nashville right after high school, he landed a four-year touring gig as guitarist, fiddler player and singer with Sherrill (Shaun) Neilsen, a gospel and tenor vocalist who memorably recorded and performed with Elvis Presley and was part of the Master 5 Gospel group. During his five years in Nashville, Cline fronted or performed on stages with Margo Smith (“The Tennessee Yodeler”), Ernest Tubb, Carl Perkins, George Jones, The Wilburn Brothers, Chris LeDoux and the band Exile. Later in his career, he opened for contemporary country star Joe Nichols.
When Cline wasn’t on the road for three weeks at a time, he did every kind of odd and/or union job he could to support his dream of playing music: construction, bricklaying, concrete, you name it. Along the way, he charted locally with his independent single “Trouble’s Back in Town” (an old Wilburn Brothers song)and put together a compilation of tunes he had written and recorded called Cyberspace Cowboy that he sold independently at gigs but never formally released.

Having grown up going to shows at Missouri’s Ozark Opry and Union Mill Opry – long before Branson had become a premiere entertainment destination – Cline achieved a lifelong dream by turning an old tobacco warehouse and auction house into a 5,000 square foot theatre in Weston called Cline’s Opry. Launched in 2011 and running through 2018, the 300-seat venue’s weekly music and comedy shows were always packed to see Cline and his many regionally and nationally known guests perform every week. The closing of the venue and a change in personal life circumstances opened up time and opportunity to finally emerge as an artist in his own right.

“I grew up on country music and bluegrass because that’s what Mom and Dad listened to,” Cline says. “Later in life, after getting on the road, I started listening more to R&B and loved it.I’ve also played a lot of Americana music over the years. So I developed my style by combining all these artists and influences into what I’m hearing, writing and recording now. I think my version of ‘Got Too Lonely This Morning’ reflects what country music ought to be like on today’s charts. Contemporary sounds do not have to take over the classic country way tracks are recorded for artists like me who want to make things new yet still stay with their roots.”