James Kocur stands out at creating meaningful music and imaginative lyrics that can capture the most diverse music fan as well as the casual listener. You’ll immediately understand where James is coming from and will find yourself on an instant enjoyable musical journey. 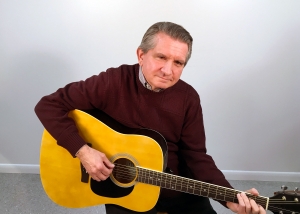 Music Monthly: Did you come from a musical home? How was music introduced to you and tell us about your introduction to the guitar?

James Kocur: I don’t think you can say that I was brought up in an overtly musical family; none of them made a living from music. However, both my Mom & Dad had good voices, though my Mom was the only one with any formal training. At family parties the kids would often perform little skits or songs. Having two older brothers, I heard a lot of what they listened to on the radio or on vinyl   that they brought into the house. I was in awe of what various guitarists could do; from rockin it to sad or even whimsical tunes.  My Dad frowned on my choice of instrument, but thankfully my Mom supported it.

MM: When did you realize that you have a terrific voice and can sing?

JK: How do I answer that without sounding conceited? I sang in the glee club in elementary school and frequently got compliments. Over the years I’ve heard laudatory comments from numerous people after performances.

MM: It’s noted that you always give 100% when performing live.  What can you attribute this to?

JK: I would start that answer with my parents, teachers & friends. I grew up believing that you always give your best because it reflects on you. Even when I worked in a supermarket to make money for college, I kept my aisle neat and well-stocked because it was MY aisle.

MM: You have three very catchy and appealing songs here right now on your website. Tell us a little about each track and what was the inspiration behind the songs?

JK: Thank you for the positive comment.  While neither “Magic Tonite” nor “Until I Looked In Your Eyes” are about any specific person or incident, I must admit that “Calling Caterina” was inspired by an aspiring actress working as a waitress in NYC. She had a voice & manner that just knocked me out. Getting back to “Magic Tonite” though, my friend Mike & I have always felt it would really be well-placed in a rom-com…you can just picture the story.

MM: Do you prefer the solitude and creative energy of writing or the activity of a live performance?

JK: Hmm, that’s a little like asking which do you prefer; ice cream or lasagna? Both are good in their own way. That said, I think that while creating something is an amazingly satisfying experience, I really enjoy sharing it with others. From the first time you run a new song by your band members through embellishing & modifying it, can make it even more special. I might add that I didn’t really enjoy playing dinner music, as the audience wasn’t really listening to you.

MM: When you compose, do you have a complete song in your mind or do you create with an idea over time write the song in stages? Any special writing technique?

JK: I’d have to start by saying that it varies, but most of my songs came to life as part of a practice session. I’d start chord doodling & maybe come up with a pattern I liked. With luck a hook line would appear from the great beyond & within hours/days I had a song. That said, I actually have sat down a few times with the intention of writing a song. I remember once someone was looking for a Roy Orbison sounding tune & lyrics. I gave it a shot & came up with one called “I Wish My Heart Could Talk” that everybody who hears it agrees I nailed. Unfortunately, the screener for the intended party had a ridiculous quibble & it never got sold.

Until I Looked in Your Eyes

MM: Who were your greatest influences?

JK: Wow, that would be one long list! Even hearing someone else’s terrible song can make you feel better about your own material.  Since I got the bug with the 60’s British invasion, I’m proud to put the Beatles first. However, I also must credit Motown; the original “Twist And Shout” was my first single record purchase and we all know that the Fab 4 had the sense to cover that one. I also loved CCR, Fleetwood Mac, The Kinks, The Moody Blues, The Rascals & The Stones. What I require from any music I listen to is that it be good. Of course that’s subjective & simplistic but I believe I have a very eclectic taste. I really enjoy classical music, but I don’t care for the unnatural voices in opera. I like country western, but I lean more towards bluegrass rather than songs about beer & trucks. What it comes down to is a judgement; do I really want to hear that song again, or was once enough? 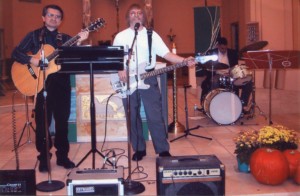 MM: You have always been a leader of a band ever since you were in your early teens. You have also performed with other bands throughout your career. Tell us about some of your special moments with your groups?

JK: Besides “my” band, The Undertakers, I played rudimentary bass in a band called The Jay-vets.  I also did a stint with a DooWop group called Sweet Shoppe. The highlight there was a CD we recorded around 2000. It never went anywhere because the group broke up while we were recording it! Still, the lead singer & I managed to finish it and I consider the experiences in the  studio and subsequently getting interviewed by Don K Reed on CBS radio to be some truly great moments in my life. I’ve also played with various singers & musicians over the years in church services & sing-a-longs. A modest, but stand out moment for me was a time when a keyboardist and I were warming up before Mass by playing a tune called “Princess” by Stewart Dudley. After the mass an elderly woman came up to us & complimented us while confiding that she had come to church feeling very depressed. Our playing had helped to lift her spirits & she thanked us. I don’t think I’ll ever forget that.

MM: You have also been a schoolteacher for a good part of your life. Did your students know that their teacher was also a prolific singer/songwriter? Did you ever perform for your students and let them enjoy the other side of James Kocur?

JK: Well, I led singing at church masses, so pretty much everybody knew I played guitar & sang. For my middle school science classes I found some good songs which helped illustrate what we were learning. When I couldn’t find exactly what I felt I needed I sometimes made small changes in songs or just wrote a whole new one. The kids enjoyed the activity & it really seemed to help them to remember the material. I even had high school student visitors relate how they remembered the songs in later years. All grades had fun singing the Bare Naked Ladies theme for The Big Bang Theory.

MM: What do you think was the defining moment when you decided that you have this passion for music?

JK: I don’t think I can see it as a single defining moment. I envision it better as more of a series of stepping stones. Moments like as a beginner conquering difficult chords. Perhaps one was the first time the guys & I played & sang a currently popular tune with acumen. I remember when we won our first “battle of the bands”. Having Ren Media take an interest in my songs is another big step.

MM: How do you think you have grown as a composer and musician over the years?

JK: I believe that the more you hear, the more you learn. Interaction with other singers & musicians over the years has widened my scope & probably honed my skills. There must be something to it because my more recent compositions are marked improvements over my earlier work.