Well, if you love multi-rhythmic fingerpicking blues guitar, coming from one man but sounds like three, you will really appreciate the ability of our next guest.  He is one unique Blues Guitarist/Vocalist that you just cannot put into any box.  He has been performing, recording and educating thousands of aspiring guitar players from all over the world.
Jim Bruce...  welcome to JazzMonthly.com.

Jazz Monthly: Tell us about the first time you picked up the guitar and start playing?

Jim Bruce: In 1964 (I was 14) I happened to hear 'Times They Are A-changin' by Bob Dylan on the radio. Most of my friends were into music at that time, and it seems like new groups and artists were popping up all over the place. The Beatles just took eveything by storm in UK at that time, followed by countless similar 'pretenders'. I liked the groups, but hearing Dylan singing that song stopped me in my tracks. It was raw, and there was something about it that resonated deep inside. You just felt it was the Truth.

I coudn't hear enough of it and loved the idea of one man and a guitar, with nowhere to hide, you could either do or you couldn't. I bought a guitar, and my family suffered some months while I learned how to play chords. Being a terrible strummer, Dylan's rendition of 'Don't Think Twice' was a breath of fresh air. Yes, fingerpicking was what I wanted to do, but how the hell do you do it? Once again, I tortured my parents while learning how to play some basic and truly horrible fingerpicking songs.

JM: You play an incredible assortment of Blues Guitar styles. What drew you to the Blues Genre?

JB: Learning those first basic fingerpicking patterns, and given my interest in American folk artists, I quickly discovered and learned songs by Tom Paxton, Joan Baez, Gordon Lightfoot, Don McClean and others. I wasn't to learn until much later that it all came from the fingerpicking styles of the early blues artists.

In 1976 I was playing a club in the North of England. After the gig, I heard a guy playing quietly in the back of the hall, and the style was new to me. He said it was ragtime, and tried to explain simple syncopation. It was fingerpicking, but it was exciting! I moved down to London, and while I earned money playing on the underground, the rest of the time I scoured the record shops for the blues.

I was proficient at fingerpicking by then, and could handle most things, but when I picked up a Blind Blake album, everything changed. The first track I played was West Coast Blues and couldn't believe it was being played by one man. Determined to learn how he did it, I reset the stylus on that vinyl record over and over again hundreds of times, painstakingly writing down what I thought the fingers of each hand were doing to create that incredibly syncopated sound.

Each week I'd buy another LP by artists such as Blind Boy Fuller, Big Bill Broonzy and others, until I could play them all. At that time I was playing around 6 hours a day for around a year. It was ragtime, ragtime, ragtime all the way, the more complex the better. I progressed onto Scott Joplin rags, and thought I was the bee's knees. Looking back, I must have been an arrogant son of a bitch in those days. It was only years later that I really discovered the blues of Lightnin' Hopkins, Robert Johnson, Scrapper Blackwell, etc, and realized that making music is much more than complexity. I spent the next 20 years trying to get that special feeling from simpler blues guitar arrangements.

JM: You have thousands of fans and students worldwide. What is it that you feel you are doing that is contributing to a success like this?

JB: One of my favorite reviews said that taking one of my lessons is like sitting at home with an old friend. That's pretty cool. Of course, a teacher needs to be able to play the stuff, but that's not the aim of a lesson, to show a pupil what you can do. The aim is always to show as many people as possible that they can play anything at all, with perseverance and the right approach. I love to get emails from people, often older guys, who bought the lessons secretly thinking that they would never be able to do it, only to find that they could! 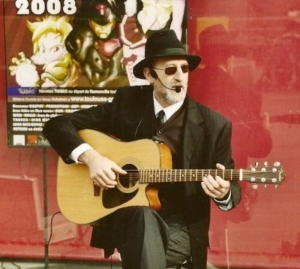 JM: You have a calm and relaxing approach to your instruction videos. Do you write out all your lesson plans first before you record? What is your basic process?

JB: I wasn't into teaching at all. Two things happened to push me into it. At the time I was playing on the street in Europe. I played the street because of the poor payments usually given in bars and other places, and often picked up gigs at private parties, weddings, etc. One time, between songs a guy asked me how I played a certain riff, I think it was Hey, Hey by Big Bill Broonzy. When I showed him, he said that's exactly what he plays, but it didn't sound the same. We explored a litte, and I found that both my hands were doing things almost unconsciously, little pulls, bends, frequent string damping by both hands. I realized that the overall sound was heavily influenced by these movements and helps make the music sound authentic. It struck me that lessons should include these nuances.

At about the same time, I came across a lesson on Youtube for West Coast Blues, and it didn't seem right at all. I didn't consider myself to be an expert, but I didn't think it was correct. I thought I'd create a video lesson, starting with Blake's 'That'll Never Happen No More', which took over three weeks! I had to learn everything about making PDFs, creating videos, which camcorders to use, video formats, uploading, etc - everything.

JM: How would you describe your music courses for the aspiring Blues Guitarist out there? What makes your lessons better or easier?

JB: There are many great teachers out there, and often which one you go for depends on what you want to play. For Gary Davis, there's no one better then Ernie Hawkins, general ragtime, Stefan Grossman, and there are many more. My lessons are no better or worse than theirs. I'm fascinated by all the blues styles, and my lessons reflect this. Many artists are covered and a student will find all fingerpicking styles - Mississippi John Hurt, Hopkins, McTell, Johnson, Broonzy, Fuller, Blake, I love 'em all! My first love was ragtime, so there's some of that, but also swing, Delta and bottleneck.

My lessons are broad based, starting with a simple blues in E up to Blind Blake's most complex arrangements. A student who can fingerpick competently will find a path through the material, progressively improving his technique and delivery as he chooses the next lesson either by artist or by song style. I've also had pros buy the course to quickly expand they're repertoire.

JM: How has your music evolved since you started teaching?

JB: Teaching makes you put your technique under the microscope. This alone has helped me play some pieces better than I used to. I've written many songs over the years, which inevitably have a bluesy feel. However, writing and performing a modern acoustic blues that sounds like the real thing is incredibly difficult, a great challenge. This is where I am now. Apart from that, I'll probably die trying to get Blake right.

JM: Who do you feel were the pioneers in Blues?

JB: It depends to some extent on the style. For example, Blake for Ragtime, Reverend Gary Davis for Gospel, Broonzy for Chicago acoustic swing, Johnson for the Delta, Hopkins, King of Texas Cool Blues, but the so-called minor bues men are the unsung heroes of the genre.

Robert Johnson is often held up as the icon, but not so much for me. He transformed tradional songs, and 'borrowed' some others. His delivery and emotional impact stands out, which is why he's revered IMO. For example, his song 'Sweet Home Chicago' was a barely disguised rip-off of Kokomo Blues by Scrapper Blackwell, a blues man with a much broader and original musical style.

Some of the very best performers I'm certain were never recorded by anyone. Willie Walker, a South Carolina guitarist who taught Rev Gary Davis, cut only two sides, one of which is called South Carolina Rag. The piece is formidable and impossible to copy. Other blues men such as Sam Chatmon give us a small taste of the stature of some of the artists around before race records brought some of them into the limelight.

JM: You are the quintessential Blues Artist. Where do you think Blues will progress from here?

JB: More and more, I think that all things turn full circle and go back to their roots. This is in progress right now, and younger blues guitar players will explore how to make a big impact while playing less, concentrating on style and feeling. An audience can get tired of a virtuoso fingerpicker pretty quickly, but when a blues man is offering up his simple best, it speaks to people on an emotional level. That's what an audience really wants, communication with the artist, not just sit there and marvel at his excellence. That's the future, more and more telling the truth through the blues, that's what it was always for (and making a buck!).