Presley Tennant “Me and You”

It's that "pinch me" moment every young singer dreams of – that split second when your childhood idol becomes not only a fan but also your most vocal supporter and encourager. For Presley Tennant, life's been a surreal whirlwind since Kelly Clarkson spun her chair around 30 seconds into the 16-year-old vocal powerhouse's rendition of "Stone Cold" during the blind auditions of Season 16 of "The Voice."

Declaring of her fellow judges, "They are insane! That's Demi Lovato. That's a big ol' range, ya'all," the three-time Grammy winner invited Presley to join "Team Kelly" and mentored her through the Live Cross Battles and the Playoffs. But their lovefest didn't end there. When they met up at the show's finale – where Presley and three of her fellow competitors tore it up on Stevie Nicks' "Edge of Seventeen" – Clarkson learned that her young protégé would be attending her show that week at The Venetian in Las Vegas. Eight years after Presley sang "Because of You" at her first ever audition for a local competition, Kelly invited her to duet on the classic hit with her live onstage.

"From the time I've been a little girl, I've grown up performing," says Presley, whose performance of "Stone Cold" has racked up nearly two million views. "So it's always been a comfortable place for me. But having been a fan of Kelly's since I was a little girl, my experiences on 'The Voice' and at the Venetian brought everything full circle, like we were meant to connect somehow. When I did the Blind Audition, I was just trying to do my best, and when she turned around so quickly, it was an amazing shock. I seriously wanted to jump around and cry, but I kept things cool and professional to get through the song. Singing and entertaining have always been second nature to me, and I'm excited about the way my time on 'The Voice' and my association with Kelly are helping me achieve a whole new level in my career."

While "The Voice" may have earned her the attention and admirations of millions, the multi-talented Southern California based Presley's been on a dynamic trajectory as an indie artist these past few years, under the guidance of famed choreographer and creative director Rosero McCoy, President of Rosero, Inc. McCoy has  created a choreography and development team – including songwriter/producers Mischke Butler and Adam Watts - dedicated to helping Presley become the all-around artist and performer she is destined to be. "I see myself as having no stylistic limitations, welcoming many genres I admire and grabbing inspiration from each of them," Presley says. "Rock has that grit, R&B and soul are all about emotion while pop has that fun dance and high energy feel that's always a blast to sing and perform."

Taking vocal lessons on a regular basis, she has worked with some of the most renowned coaches in the industry, including Brittany McMains, Mischke Butler, Valerie Moorehouse, Michelle Gruska, and Trelawny Rose (The Voice). Recording at famed facilities like Westlake Studios, Henson Studios and Revolver Studios, she has worked with producers/engineers 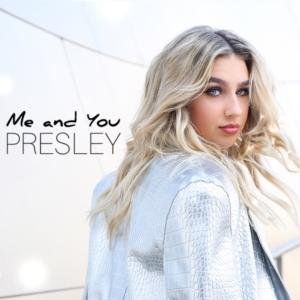 Presley dropped her latest single, the emotional power ballad "Me and You." She is currently in the studio working on her first EP. Her previously released tracks since 2016 reflect those passions for a multitude of genres. In 2018, her eclectic output included "Childish," a playful pop/hip-hop collaboration with emerging rapper Well Written; "Stronger," an inspirational EDM/hip-hop joint, also with Well Written; "So Special," an exotic hip-hop flavored tune with King Lion Miguel; and the tour-de-force mystical pop ballad "The Woods." Prior to that, Presley released the high energy EDM jam "Bff" and two other tracks with Well Written, the fiery power-pop/EDM song "Soda Pop" and sassy "O.O.T.D.," which features a spirited rap by the singer.

"No matter who I am collaborating with, I have always pushed to record my original music," says Presley, who counts her influences as everyone from contemporary greats Lovato, Jessie J and Christina Aguilera to soul legends Aretha Franklin and Etta James. "I've been writing songs since I was 12 or 13, and while the styles may vary as I've worked towards defining myself as an artist, there are always elements in each tune that uniquely reflects who I am. Musically and lyrically, I always want to make music and write storylines that are true to myself.

"The themes have evolved since I started writing because I have a lot more life experiences to draw emotions from," she adds. "There is so much more that I want to stay now than I could have fathomed just a few years ago. As I continue to grow into who I am and the artist I want to be, I'm enjoying navigating the cool twists and turns and working with so many talented people who bring out the best in me."

After acing the American Idol program on PlayStation 4 at age 7, Presley took the initiative to search for and call up a local vocal teacher and arrange for lessons. At 10, A knockout performance at a local Boys and Girls Club competition in Temecula, CA – where she was voted "fan favorite" - led to Presley joining the popular girl group 5LPs (five little princesses), with whom she recorded, danced and performed throughout the U.S. and abroad, everywhere from school presentations to amusement parks and other prestigious venues. By 12, she had performed for greats like The Jacksons and Kelly Rowland and recorded in the famed Westlake Recording Studios in Michael Jackson's Villa.

Over the past few years, Presley has done over 100 live performances. She was named as the Headliner at the Rise Up Tour event at the Avalon in Hollywood. She's commanded the stage at the Hard Rock Café Hollywood, the NAMM show, VidCon and House of Blues. Presley also performed at a halftime show at Staples Center in front of 15,000 kids on two separate occasions. Other live shows include LA Live ESPN, GramMarch, Charity Events at Starwest Studios, the Charles Schulz Theatre at Knott's Berry Farm (in front of 2000 kids), National Cheer/Dance Competition for Sharp International in Las Vegas, Orange County Fair and the LA Dance Magic Nationals.

In addition, she has sung the National Anthem at Staples and Honda Center for KISS on several occasions. Presley was also selected as an Ambassador for Young Women with the LA Sparks WNBA and attended several events promoting growth & confidence amongst her peers. For 2017, she was selected as an entertainer for Sharp International and has performed at 8-10 events, including Hawaii and the Nationals in Las Vegas; these shows have average audiences of 600-2000 kids per event, ranging in age from 6 to 18. Presley has also been interviewed and featured in a variety of radio, magazine and blogs, discussing her career and incredible journey.

"Sometimes, I enjoy looking back at the different experiences of my life, and am humbled by the opportunities I've had to share my music in so many ways," she says. "Yet I'm never going to achieve my goals if I just keep looking back, so I'm very determined to push myself to be better today than I was yesterday as both a person and an artist. Being a true well-rounded artist/performer and being able to represent and be a voice for my generation are the most important aspects of everything I am doing now. I truly want to use my music as a platform to inspire young people and up and coming artists who have the same dreams I do. Just like Kelly Clarkson has done for me, I want to leave a meaningful, lasting impact on everyone whose hearts I am able to touch."