Rich Baron excels at creating memorable melodies that satisfy the most sophisticated music fan as well as the casual listener.
His recordings embody his ongoing search for new ways to express himself through his eclectic songwriting and incredible vocal range. Listeners will immediately understand where he’s coming from as they find themselves on an immediate and enjoyable soulful journey.

MM: Congratulations on being in the elite group of Musicians that can have a professional music career for quite a while and constantly add new fans every time you write and perform a new song. What is your secret?

Rich Baron: I always loved Paul Mc Cartny's answer to this question. And I quote "There is a God isn’t there!" We all have various kinds of gifts and mine happens to be Melody and Singing, both through hard work and study grow exponentially over the years. At 19 years of age, while recuperating from an auto accident, I discovered I could sing, and thru hard work and imitation learned to sing, and found out that I had a high range. At 24 I bought my first Guitar and discovered that melodies jumped out of my head while I played chords. Brand new melodies that never existed before...You might imagine my excitement back then.

MM: Your voice has an incredible range. I’ve heard people say, “ When listening to Rich Baron, his voice takes off and you say Wow, this guy can sing. Then all of a sudden He goes higher… and then even higher with such emotion!” When did you learn that you have such a powerful voice? How did it all happen?

RB: When one starts out on this journey of vocal ability, lessons would be a good thing, however I didn't have money for lessons, so I imitated Johnny Mathis style of singing. figuring if I could sound like him I'm doing something right. I was the maintenance guy at a facility that had an incredible bathroom with a stupendous echo chamber effect. That makes it easier to scat sing for longer periods. There's nothing like hearing your voice and what it needs to do to sound good like an echo chamber room. Someone said to me one night that I sounded just like Johnny Mathis...the only trouble with that was there was only one Johnny Mathis. It was the best thing anyone could have said to me, so I set out to find MY voice. That happened when I bought my first guitar after seeing some other young artists who wrote and played their own instruments. When I wrote a song, I had to sing it like no other, there was no reference point to grab on to. This took several years though. I had to leave the John Denver, and Tim Buckley influences behind. By the late 70's it was there.

MM: You even entered a Songwriting Competition with your music when you were starting out. Tell us about that experience?

RB: I believed that the songs I was writing in the Mid 70's were very good...you have to believe strongly or pack up and go home. So I entered the 75 and 76 World Song Contest to see where I would finish, would others feel the same? Was I kidding myself?...and low and behold I won first place in 76. It was like American Idol back then. It got me a record deal and a foot in the business.

MM: You not only write great music and sing; you also play the guitar… the perfect Singer Songwriter Performer/Composer. How many songs have you written? Do you have a specific formula when writing? What is your songwriting process?

RB: I truly lost count on the number of songs I've written, approaching 1000 perhaps? There's no particular formula for me to write. Playing chord patterns was the first method, that's why studying with someone far more advanced than yourself is SOOOO important. During these chord playings, melodies come, as you vocalize them you might say actual words, sometimes these words were actual inspiration. I almost never start out with a subject matter. The inspiration gives me the subject. Melody first, then words, the words get better as time passes, you grow. Sometimes I'm struggling with a new song and something stronger takes me in another direction, and I leave the first song to complete the better second one. I've also had songs written in the 70's that I couldn't finish, that I finished this year, because I've learned so much more over the years. The last few years have been the best. I actually wake up most mornings with a melody, or musical sentence right out of the gate, and I record it on my phone and finish it when there's time...There's God again! Throwing me the ball.

Written many moons ago 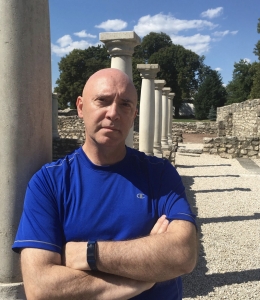 MM: The excitement of your career doesn’t slow down at all. You also have hooked up with another extremely talented artist, Pete Caputo. Pete not only sings, composes and plays multiple instruments, he engineers and produces the sessions. Wow!
You both got together and added a few more musicians to the group and are called,” Late Night Pizza.” How did all this come about?

RB: Several years ago I was playing out in an acoustic duo, and we decided we wanted different avenues to explore. Pete Caputo used to come and see us regularly. Pete and I were in a band together, in the 80's. I had asked him to do some studio work, and gave him about a dozen songs to learn. He was blown away to say the least, and offered a partnership in an actual Band to record original songs in his basement studio. I said yes, and the rest is history. I had met Kevin Bowden and Fermon Bannister at a local coffee house, and they loved my style and songs, so we invited them aboard.

MM: How does a typical recording session go? Do you and Pete have the song and arrangement already set? Do you all jam in the studio first? Take us through a Late Night Pizza Recording Session. 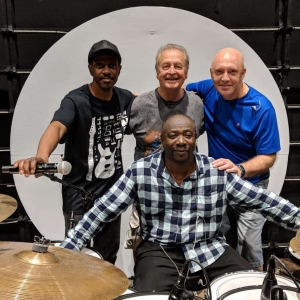 RB: So our sessions go like this, I come in and do the guitar and vocals to a click track; Pete then adds the piano and background vocals, strings etc. sometimes bass and drums if the guys are not available. Russ Thompson, comes in for the finishing touches on lead guitar, and other Jazz cats do the horns...Pete puts it all together and we come to agreement on the final mix.

MM: "Night of the Living Creature" is Late Night Pizza’s new Project. What is the concept of this new release?  Give us a “behind the scenes” preview on your new release?

RB: “Night of the Lonely Creature” was born out of the heartache of my 29 yr marriage breakup. I was a lonely creature. But in the end the Sun comes out… also Pete was inspired by Leonardo Da Vinci, and his struggles and triumphs, which were like my song, so he wrote three DA Vinci songs. The album is dark, but hopeful...our best work to date.

MM: “You’re in Me & I’m in You” portrays a lighter Jazzy feel that really entices the listener to sit back and enjoy one’s thoughts. “She’s In The Choir” paints a different emotional picture in one’s mind showing the wide-range of you and Pete’s writing abilities.  What is the background and inspiration behind these two songs?

RB: I love the Brazilian samba music of Jobim, and it comes out in much that I write, when I realized, “Your in Me and I'm in You” was a love song, I wanted it to be happy, the kind of love we're all longing, for coming to realization, the whole thing started out with the ooohs. “She's in the Choir", was about many a young man who secretly longs for a girl in his school choir, I had that experience. It hits everyone hard; they love it, so do I.

MM: Tell us where our readers get to see and hear more of you and your music?

RB: Right now we're recording new songs written during lockdown, and no one is playing out live at this point, so we'll see!!!

MM: What is beyond the horizon for Rich Baron?

RB: I'm looking forward to playing live again, there's nothing like it, it's a real reality check to see where you're at with the public. I'm longing to do a jazz torch song album reminiscent of the great American Songbook, my first love in music. I have a dozen fantastic jazz ballads I'm sitting on for that special producer...these songs are on a far higher level than anything I've previously done, so stay tuned. For now look for us on: