Lt. Alan Porchetti lives a life steeped in Salvation Army. In fact, he credits the organization with his family’s survival. He and his mother immigrated from Argentina in 2001 and went from JFK International Airport directly to the Salvation Army’s headquarters in Queens.

“Salvation Army took our family and embraced us and helped us out with clothing, with food, and all sorts of items that we needed to survive in a foreign country,” he said, his father was already living in New York and his two siblings came a month later.

The organization also nurtured Porchetti’s love of music. Throughout high school, he’d spend his mornings and evenings at the Salvation Army attending youth group and karate classes. He said he aspired to play in a heavy metal band, but his teachers had a different suggestion for him: tuba. “I started playing tuba at the Salvation Army and, from there, got involved with other instruments such as piano, guitar and drums.”

Now, as a corps officer of the Salvation Army Trenton Citadel based in Trenton, he shares that musical passion with young people by running a Music and Creative Arts program in Trenton.

“We can take those children who are not into sports or video games, and we can teach them a way of expressing themselves,” he said. “I’m also a big believer that music saves lives.”

He started a successful afterschool music program in a small facility when he was based in Bound Brook in 2018. Two years later, he was relocated to Trenton and said he was excited by the spacious location, which contained four classrooms and a large chapel. In Trenton, he also saw a huge void. Schools were closed to in-person instruction, and arts programs were practically nonexistent. He realized with the space at hand he could create a safe and socially distanced program.

“I’m a big believer that if we’re going to teach music then it must be in person,” he said. “The children need to be able to feel the instrument, to play the strings or the keys in the piano.”

Partner organizations gave him a reduced price or donated equipment such as guitars, trumpets, trombones and electric pianos. Volunteers painted the classrooms, and he purchased plexiglass to divide the rooms into 12 spaces for students to play their instruments. He also installed large mirrors to create a dance studio where students learn ballet, hip-hop, sacred and other dance forms.

In January, he launched the Music and Creative Arts program with hour-long classes on Tuesday and Wednesday evenings. Sessions are divided by age, and students range from 7 to 17 years old.

Masks must be worn at all times (except when playing a wind instrument), temperatures are checked, hands are sanitized, and the equipment is wiped down after each use. He charges a $20 participation fee to cover the cost of equipment repairs and so families feel invested in the program. 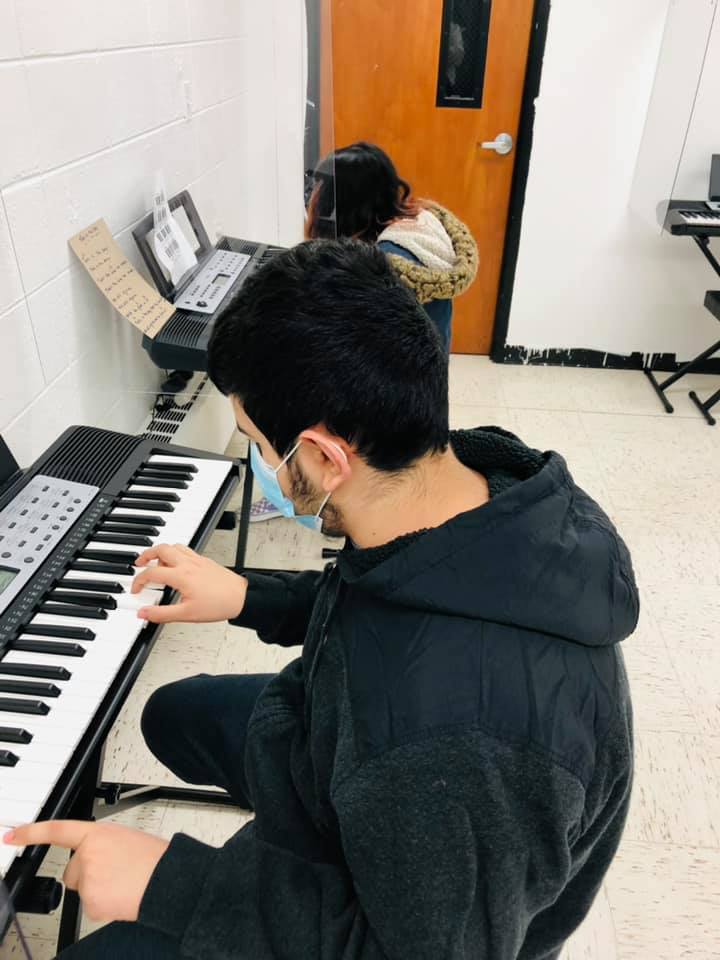 At the same time lessons are happening, his wife, also a corps officer of the Salvation Army, leads programs for families such as art projects or health care presentations. There’s also a diaper bank and food pantry onsite.

His spring semester ended May 2 with a concert after church and a pizza party for the students. During the summer months, parents volunteer to help run a youth chorus and other programs. The afterschool Music and Creative Arts program resumes in September.

“You don’t know what’s going to happen when the parents leave the music school,” Porchetti said. “We believe we can embrace the whole family and, at the same time, provide a message of hope.”

Porchetti is fundraising for a new building. Donations can be made here. For information about the Music and Creative Arts program, call 609-599-9373 or email njtrentoncorps@use.salvationarmy.org.