LOS ANGELES -- There's a ruckus being made known as The Revelries emerging out of the Southeast, and EDGEOUT Records is proud to announce it has signed the foursome from Louisiana to a development deal and will collaborate with Beau Bailey (lead vocals/rhythm guitar), Logan Maggio (lead guitar/vocals), Jack Gonsoulin (bass guitar) and John Lewis (drums/percussion/vocals) in building a lifelong music career. With the group managed by Red Light Management, tour dates throughout the spring and now signed to EDGEOUT, they are off to a solid start.
"EDGEOUT Records is committed to discovering the next generation of rock artists," said label chief and veteran music executive Tony Guanci, who signed an exclusive global deal to release bands through Universal Music Group/UMe. "The Revelries' talent, drive and desire are only rivaled by their work ethic. We expect great things from the band."

The Revelries started playing shows around Louisiana State University (LSU) bars and fraternities. Over the past two years the band's popularity has spread throughout the southeast. Word about their dynamic live shows caught the attention of Guanci and the EDGEOUT/UMG/UMe team.

"The Revelries are the first band to have access to the many resources offered during The Studio," said Cheryl Benson-Guanci, EDGEOUT co-founder and head of Artist Development/A&R.

A core component of EDGEOUT Records is "The Studio," a deep-dive into the critical aspects of development of an artist from a local/regional level to a worldwide stage. Over several months, the band is given the resources to focus on their direction, songs, performance, personal wellness, artwork/logos, etc. They also learn about the business aspects of an ever-growing number of channels, exposure and revenue in the global marketplace. 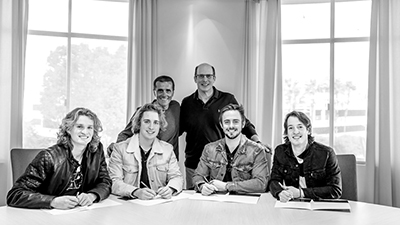 "They deliver exciting live shows and write catchy songs. I loved their attitude right away. Beau, Logan, Jack and John all have this kind of creative drive that fuels everything they do. It's our goal to provide them the resources and create opportunities for them to succeed," adds Benson-Guanci.

"We are excited to be a part of both the Universal and EDGEOUT families," said Bailey. "Since we started the band, we have wanted our music to reach as many people as possible. We can't wait to continue that goal with such a great team."

"The band has been working hard and has accomplished a lot on their own in the past two years." said Jefferson Manning of Red Light Management. "The backing of EGDEOUT Records and Universal Music Group/UMe will be a huge help in the continued success of The Revelries."

The Revelries began late one night in the Fall of 2016, when lead singer, Beau Bailey, and drummer, John Lewis, decided to get together for a dorm-room jam at LSU. The two quickly realized they shared a passion for performing and rapidly infiltrated the local Baton Rouge music scene. Playing their version of high-energy, U.K. style Pop-Rock and seeing audiences double along the way, it wasn't long until they sought the assistance of manager Jefferson Manning, who helped build a formal team. They quickly went from playing small, local Baton Rouge dives to bars, private events and venues all across the Southeast. After releasing their first two singles, "Blonde Hair. Blue Eyes" and "Abbot Kinney," in 2018, guitarist Logan Maggio became a full-fledged member. After releasing the After 7 EP and touring throughout the Southeast in 2019, The Revelries solidified their lineup with the addition of fellow LSU grad and bass player Jack Gonsoulin.

If revelry is defined by lively and noisy festivities, then The Revelries live up to their name and suggest all is about to break loose. Creating guitar-driven rock underscored by a rhythmic tension and driven by agile, honest vocals, their music traverses fun-loving pop-rock, soaring alt-rock and upbeat ballads for a fresh sound influenced by artists such as U2, Catfish and the Bottlemen, Kings of Leon, and John Mayer.

Immediate plans call for The Revelries to record new music with the goal of releasing in Summer 2020.

More about THE REVELRIES

EDGEOUT Records officially launched in December 2018 with a mission to find the world's next up-and-coming rock bands and artists, giving them access to The Studio artist development program. Learn more in this Pollstar story about the label: www.pollstar.com/article/edgeout-records-new-rock-label-with-live-focus-launches-exclusive-136814

Universal Music Enterprises (UMe) is the centralized U.S. catalog and special markets entity for UMG. Working in tandem with all of the company's record labels, UMe provides a frontline approach to catalog management, a concentration of resources, opportunities in new technologies and an emphasis on strategic marketing initiatives to engage all types of consumers across multiple entry points and platforms.

Universal Music Group (UMG) is the world leader in music-based entertainment, with a broad array of businesses engaged in recorded music, music publishing, merchandising and audiovisual content in more than 60 countries. Featuring the most comprehensive catalog of recordings and songs across every musical genre, UMG identifies and develops artists and produces and distributes the most critically acclaimed and commercially successful music in the world. Committed to artistry, innovation and entrepreneurship, UMG fosters the development of services, platforms and business models in order to broaden artistic and commercial opportunities for our artists and create new experiences for fans. Universal Music Group is a Vivendi company.