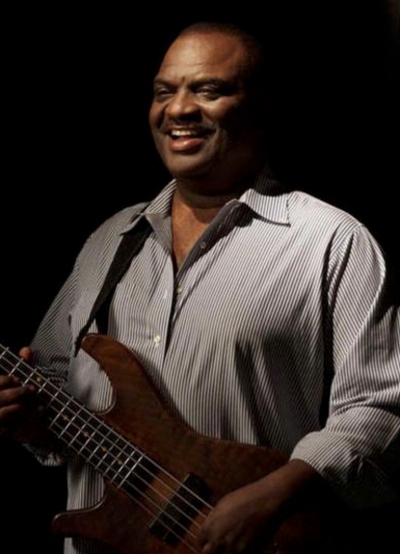 When the great Duke Ellington wanted to praise someone, he would grant that person his signature phrase “Beyond Category.” Well, Mr. Ellington’s expression, comes the closest in describing bass and synthesizer artist Tony Saunders.   Yes most definitely, Mr. Saunders is truly “Beyond Category.” Tony Saunders is a master artist in Rock, Jazz, Gospel, R&B, Pop and World Music, and then… as if this weren’t enough… he sparkles in each of their individual “subgenres!” The breadth as well as the depth of Tony’s art is that he is just so superb in so many different music styles. Simply stated, Tony Saunders is one of the most versatile artists in today’s music world.

With all of his amazing success throughout the decades, Two-time Emmy Award winning Tony Saunders is not content to just “rest on his laurels.” Tony could never just bask in the memories of his former glories…and there are many!  Rather, he—even as you are reading this now, is currently busy working hard on a new CD. We are always excited when Tony’s creative engine is firing on all cylinders. We will let you know more about this latest Saunders project as we learn more.

His latest album,“Sexy Somethin” leaves a lasting impression and arouses deep emotion and feeling from the very first track to the very last! His first single off of that CD, Rock Steady is a seductive “Saunders’ Spin” on the 1987 hit by The Whispers. It features guitarist/producer/hitmaker Nils. Tony’s pulsating bass throughout this tune takes the listener on a romantic adventure, something for which Tony is known. When we think of sexy music, we often think of slow, sultry tracks, but “Rock Steady” has a fast, danceable groove. Leave it to Tony Saunders to allure and bewitch us with his electrifying bass at that bright tempo!  “Tony’s Romance” featuring Paul Jackson Jr. is another standout on the album. As I listen to it, I can’t help wondering how Tony can keep writing these catchy tunes! The dialog between Jackson and Saunders is a captivating exchange of ideas. There is a deep grove there—for sure… but there is also a deep musical “intelligence” in their conversation.

“Chasing the Dream” is a hip jam that features Nils and contemporary saxophonist Jeff Ryan, propelled by Tony who “anchors” the melody and then later creates one of the coolest syncopated bass solos you will ever hear! Then, he plays the melody on his bass which acts as a bridge to launch his bandmates into an astonishing interplay on the fade out. That is true musicianship! Tony Saunders is always generous in spirit and quick to acknowledge those artists who touched him---who inspired him. Tony unreservedly and openly declares his deep affection for the late George Duke with “After George.”  Saunders is joined once again by Nils and also by keyboardist Jeff Lorber. Jeff and Paul Jackson Jr. played with George Duke on many occasions, so having them on this album makes Tony feel that he has come (in his own words) “full circle in my career.” “After George” is an affectionate musical poem by Tony to Mr. George Duke. Paul Brown and Ray Chew lend their esteemed talents to the current single, “Bouck Avenue.”  What a performance this is!  Right at the very beginning, Tony sets the mood on this, demonstrating the wonderful density and accuracy of his playing. He then hands the melody off to the most capable Paul Brown, whose fantastic artistry totally rings out. Ray Chew’s acoustic piano solo is pleasingly light with harmonic color tones. “Boucke Avenue” is a beautiful piece of music… great playing by all. There are 10 more tracks on “Sexy Somethin.” There is something on that album for just about everyone. You don’t want to miss this one!

Talk about staying power and endurance with the public, Tony Saunders has remained on the charts for over 64 weeks and has over a million streams on Spotify! Oh, and you can hear Tony on his own radio show twice a week on Worldwidejazzradio.com on Tuesdays at 4 pm and on Saturdays at 5 pm—Pacific Standard Time. There you’ll get to enjoy Tony as a presenter; and yes, it’s the same engaging and warm Tony that you love on the stage—but this time you will hear him emote as an “on-air” personality. He is a true joy to listen to. Upcoming, Tony will be sharing his talents at the Golden Gate Jazz Festival at the Presidio Theatre in San Francisco where he will be accompanying other performers on that great stage. That is scheduled for August 27—29.

Tony Saunders is the son of renowned San Francisco Bay area keyboardist Merl Saunders. Merl garnered quite a reputation in the Bay Area as a musician. Merl’s band featured a very young Johnny Mathis. Tony’s dad was an excellent pianist who also played with Lionel Hampton. To this day, Tony speaks so glowingly of his dad AND his mom Betty who inspired him, believed in him, and gave him the gift of music.

Tony is, and has always been, a collaborative/team performer-- even when he is the leader! That says so much about the character of this gentleman. Of course, he’s a supreme showman, and he will wow the crowd with his virtuosity, and occasional playful humor on that stage when it’s the right moment, but he’s also the absolute artist.  The music comes always first with him. And it will always be that way with Tony Saunders.